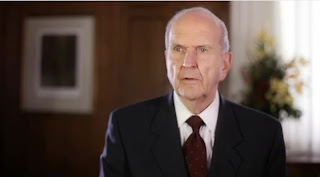 I recently watched a Mormon messages video sent to me (that can be found here). The video is a story shared by Russell M. Nelson who is a member of the quorum of 12 apostles of the Church of Jesus Christ of Latter-Day Saints. In the story, Nelson tells of a hair raising experience he had while flying on a small plane. He said the engine, that he could see outside his window, burst into flames, exploded and then spewed burning oil all over the side of the plane. He said that he was curious at a woman who was crying and screaming hysterically as the plane started to dive due to the loss of the engine. He said he was calm and felt "ready to meet his maker" as he thought the plane might be spiraling to his certain death. The implication is then made, through the comments he makes next, that those who fear or are suffering are somehow inferior to those who have faith or belief in an afterlife.

I think there must be something wrong with me because, while many will say they find the message and the video inspiring and uplifting, I find it condescending and demeaning, especially to the poor woman who wasn't ready to die. He is taking a perfectly normal reaction to facing potential death in a plane crash (screaming and crying hysterically) and turning it into something that is to be avoided if you believe strongly enough in God and an afterlife. Who's to say that the woman didn't believe in God or that she wasn't crying because she was sinful or felt inadequate...SHE WAS CRYING BECAUSE SHE DIDN'T WANT TO DIE! THAT'S IT. Is he saying that those who are afraid of something (like dying) lack faith and if they just believed more they would all be calm like he was? I'm sorry, but I have seen many faithful people get scared and cry when their life was in danger. No matter what your level of faith, everyone will react differently - sometimes with calmness, sometimes with hysteria - when faced with a life threatening situation. Regardless of who you are or what you believe, everybody get's scared once in a while.

It is normal to be scared and our particular reaction in that moment may be more due to our personality or current disposition than anything to do with spiritual or religious beliefs. It is normal to be afraid and we shouldn't put down people for engaging in a perfectly reasonable and normal response to the loss of their life. And we certainly shouldn't put our response to that situation on a pedestal because we happen to not be afraid in that moment. If we did not have fear, or get scared, we would all die off because of what we would now call stupidity.

Don't get me wrong, fear is not something that is desirable. I don't go around looking for things to be afraid of. Rather, fear is a normal thing. It is not something to be demonized in order to get you to believe the way I do about the existence of a higher power or what might happen after we all die. I see this as a despicable tool being used by Nelson to manipulate people and get them to convert to his point of view. It just seems like this man is taking something that is normal and exploiting it to make himself appear knowledgeable and as having something that you need. How is this different than a snake oil salesman who tells you that you are suffering from this or that and only he has the cure? Frankly, I don't see much difference.

After re-watching the video, I am actually impressed that Mr. Nelson does not make any definite statements as to what you need, rather he says "a faith" instead of "the faith" when referring to what is needed to overcome fear or sadness. Baby steps towards increased tolerance and acceptance of other faith traditions, I guess. I honestly think Nelson has the benefit of a skilled PR and legal department guiding and editing his words in this video so those that are paying attention can't gather too much literal ammunition to cry intolerance on the church. While he is very careful, the presumptions are glaring.

I would also submit that Mr. Nelson's interpretation of the scripture he quotes in the video is being misinterpreted. The verses he quotes are a snippet of a lengthy response from Jesus to his apostles asking when he would come again and what signs would follow so that they might know and be ready (see Luke 21:7). The verses Nelson quotes are as follows (from Luke 21);


25 And there shall be signs in the sun, and in the moon, and in the stars; and upon the earth distress of nations, with perplexity; the sea and the waves roaring;


26 Men’s hearts failing them for fear, and for looking after those things which are coming on the earth: for the powers of heaven shall be shaken.


27 And then shall they see the Son of man coming in a cloud with power and great glory.

When I read these verses it sounds to me like the faithful will be the one's aware of the signs that indicate the 2nd coming of Jesus is near. Especially since the audience in these verses is the apostles of Jesus. Those that believe are the one's whose hearts will fail them. This means the faithful will fear because it is perceived that the things they are "looking after" (meaning the signs that they believe have been foretold - even though there is really nothing explicit or detailed about what these events might be exactly, except for those things that have plagued us for centuries like war, famine, natural disasters, etc.) are coming and the "powers of heaven" shall be shaken. In other words, the powers of heaven can only mean those that are the one's supposedly possessing said powers. Those that supposedly have these powers (God given power, authority or priesthood) will be shaken.

To understand this verse further, and add a different perspective, let's try to understand what would happen if astronomers see something out of the ordinary concerning the sun, moon or stars. It will most certainly not cause them to remember that Jesus' second coming is near. Rather, if these things seem to spell the end of our lives on this planet, scientists will attempt to understand what is happening and warn us if there is an impending disaster due to those things. Certainly the world at large would be scared if that sort of thing were announced, or experienced, but it would not be according to signs having been foretold in the scriptures. Scripture is intentionally vague when it comes to specific signs or atrocities so that they are all inclusive. These vague things are then used as mechanisms to convince, and ultimately control, people to believe in what the current professors of those teachings are saying.

Nelson then goes on to tell us that the reason hearts will fail (or people will experience fear or sadness) is because we forget our identity and our purpose. Apparently showing people in silence as they argue or look generally sad is supposed to re-enforce this idea. I feel bad about this representation because, while it may speak to those who struggle in different ways, it portrays these people as lacking in some way. People who experience normal things that may cause stress in their lives are shown as imperfect and needing the help that Nelson can apparently provide.

What makes me even more sad is that many times the church, and the teachings that Nelson espouses, are actually the CAUSE of those feelings of inadequacy or stress, fear or sadness. It is very much a self perpetuating and self sustaining mechanism. You feel fear or sadness because you lack what the LDS church can supposedly provide for you and if you continue to feel those feelings, you are just not doing enough and need to do more. Read more, pray more, do more service and eventually those feelings will subside. When in reality, the more you engage in those kinds of behaviors, the more you realize you can't possibly do it all AND keep up with everything else in your life. Something's gotta give and, invariably, the things that give first are those things the church is telling you that you are not doing enough of. If only you did better you will eventually find the peace Nelson promises. Only trouble is, it never really shows up because the messages repeated every week at church are geared to making you feel inadequate.

He's seen the troubles brought to people through;
- Divorce
- Children or grandchildren going astray
- Disability, illness, injuries
While pictured is a women crying over a baby in an incubator at an ICU, a man packing up and leaving after losing his job and a woman who is sad after an argument with her husband.

Nelson is grateful for the gospel of Jesus Christ that allows him that kind of strength to be helped during these tumultuous times. I'm sorry, but I would rather prefer to see our society as being in a BETTER state than it was a century or two ago. While there may have been several major natural disasters (shown in Nelson's video) to happen in recent years, studies have shown that these events are actually decreasing (according to a Freakonomics Radio podcast: "The folly of prediction" 9/14/2011). Violent crime is down, homicide is down, nearly every statistic that could be utilized to potentially measure the state of bad things happening (maybe with the exception of joblessness and homelessness which are pretty cyclical) is down. We are more tolerant and less violent towards each other. I'm not sure to what Nelson is referring when he labels these as tumultuous times, unless he is alluding to the things listed above that are inevitable (i.e. death, disability, illness, premature births, unemployment, arguments and injuries) to happen in all of our lives. If that is the case, the message that we need to lift ourselves up and move on is appreciated. However, the presumption that it is only the gospel of Jesus Christ that will enable people to do that is highly insulting, intolerant and narrow-minded.

While the music and scenes are all precisely designed to evoke emotion using the church owned, Bonneville communications HeartSell® technique, it is really difficult to not shed a tear over watching this video. But something just doesn't feel right. Such blatant manipulation of emotion ought to be outlawed when used to make you believe that you are screwed up and that what the church has to offer you is what represents the cure.

Of course, it is even more humorous that he is holding a Book of Mormon in his lap at the end of the video. As if he was not afraid because of the Book of Mormon. It's like he is saying, "If you will just read the Book of Mormon you will not be afraid like the poor woman that cried hysterically when facing the prospect of her imminent and untimely demise." What a crock! Tell me if you disagree, I can take it.
Posted by Facsimilogos at Wednesday, November 30, 2011

Facsimilogos
I'm an observer here seeking affiliation with intelligent life forms. Primary interests are in the deep place known as the human mind, body and science. The advancement of the human race is most intriguing to me. I am also a disaffected member of the LDS church who is working through things with my still believing children.